I must admit,  thanks to the prancing around dressed in nothing but black (part and package of doing a drama degree), I am no stranger to the field of contemporary dance – in fact, it is something that I have no shame in admitting I enjoy. However, a lot of people may wrinkle their nose up at the thought of people strutting round an empty stage in an all-in-one leotard with a deafening soundtrack that is most often associated with the genre. Whilst sometimes this may happen, and is for the most part to be avoided, this is not what contemporary dance is about and a preconception that DanceXchange is aiming to contest with their fantastic 10th anniversary season.

DanceXchange (or dx) is celebrating ten successful years based here at  Birmingham Hippodrome complex. Originally established in 1993, the organisation moved to the refurbished Hippodrome in 2001 and formed the largest dance partnership in Britain with Birmingham Hippodrome and Birmingham Royal Ballet. Ten years later the partnership is still going strong, providing some of the best dance facilities in Britain today including one of the UK’s most important dance venues, The Patrick Centre. 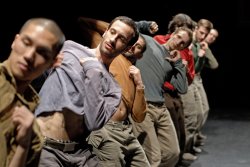 The company is celebrating with a special anniversary season of performances featuring work by companies that have been performed and created at dx during the last decade such as Hofesh Shechter Company, Rosie Kay Dance Company and 2Faced Dance Company as well as some of the best new names in dance including Frauke Requardt and TAO Dance Theatre.

Last night, I invited our First Night Bloggers, Alex Woolliscroft and Marcus Hubbard, along to The Patrick Centre to check out just what all the fuss is about and, more importantly whether contemporary dance can appeal to a new and young audience. This was their very visit to DanceXchange and I was keen to see what they made of the whole thing, bearing in mind that Alex is 18 and Marcus 17 – would I be forcing them along to an hour and a half of what they regarded to be a lengthy, metaphorical torture!?

I am glad to report quite the opposite; the performance – Hofesh Shechter’s Uprising & The Art of Not Looking Back – blew us all away. Marcus commented “I was surprised at how much I enjoyed my first experience at the DanceXchange… I wasn’t expecting much to begin with but it’s opened up my mind to smaller less commercialised theatre performance.”  He added “I think dance would appeal to young people because it isn’t mainstream theatre and elitist. It’s a chance to see something cultured and thought provoking in a non-elitist atmosphere.”  To add to Marcus’s enthusiasm Alex said “I have to admit, before last night I had never seen a contemporary dance show, finding it boring and perhaps not to my taste. Last night completely changed my opinion of dance and the art form”.

You can see our Bloggers initial reactions after the show by visiting our Youtube Channel. Their full blog on the evening and First Night experiences can be found here for Marcus’s review,  and here for Alex’s report.

The great thing about the new dx season is that they are offering our First Night subscribers tickets to shows for just £5 – so go on, try something different!  You can find out more about the scheme for 16-21 year old’s and how to book your tickets by clicking here. If you aren’t lucky enough to be under 21, you can still get great offers on tickets and find out more information by visiting the DanceXchange website.

Happy Birthday DanceXchange from everyone at Birmingham Hippodrome!