The Nutcracker returns to the Birmingham Hippodrome stage this winter, 28 November – 13 December 2014. It’s nearly a quarter of a century since this production was created here in Birmingham, dedicated to the city that adopted the world-famous touring ballet company. Here is a selection of archive poster artwork from over the years.

This is from 1991, right back in the early years of the production, with a poster image painted especially by set and costume designer John MacFarlane. There’s no sign of our young heroine, Clara, yet, but we can see the Nutcracker Doll that she receives on Christmas Eve, and a teasing look at the rat that will later cause so much trouble. John MacFarlane later went on to create gorgeous designs for our recent production of Cinderella.

This poster is from 1997, and marks the start of a long battle for poster supremacy between the heroes and villains of the story. When a magical spell causes Clara’s living room to grow around her, and all the toys and Christmas decorations within it, the rats that live beneath the fireplace grow too. Led by their ruler, King Rat, they attempt to take control of the living room, and it is up to Clara and her Nutcracker doll to stop him. 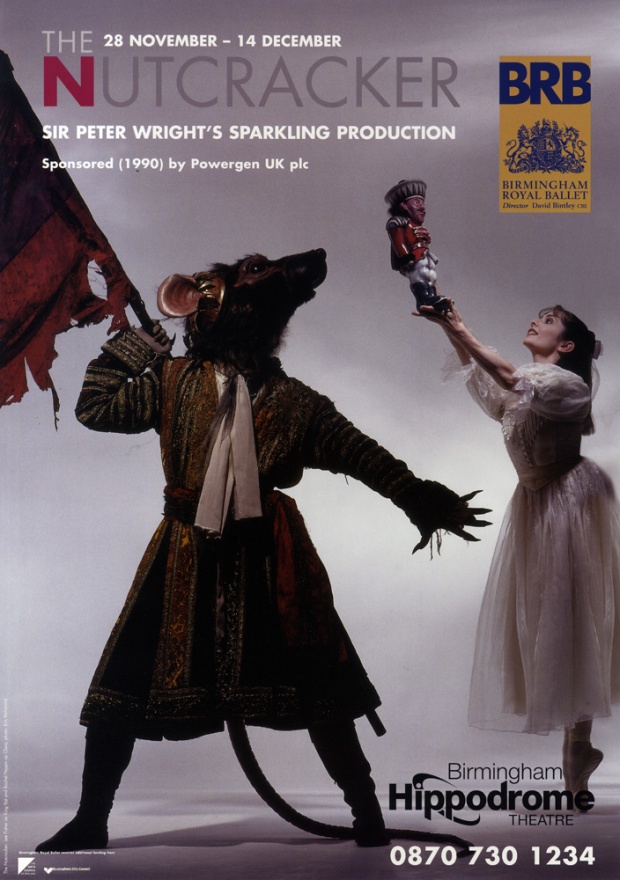 In 2002, Clara and King Rat called a truce long enough to share the poster between them. Clara lifts the doll, while King Rat bears the tattered flag that he waves to rally his rodent ranks. While it looks worn and torn, the flag used in the show actually undergoes regular maintenance throughout each Nutcracker season. Rips are stitched and strengthened to ensure that it remains suitably tatty without ever falling completely to pieces!

In 2001, the poster showed the character responsible for the conjuring – Drosselmeyer the magician. It is he who gives Clara the gift of the doll, later spotting her creeping back down to play with it in the middle of the night. And so begins the most unforgettable Christmas Eve of her life, as Drosselmeyer summons up tests and treats before guiding her safely home.

Drosselmeyer first appeared in 1999, with this photo taken during a live performance. In the ballet Drosselmeyer is a guest at a party thrown by Clara’s parents, and producer Peter Wright enlisted a professional magician to design tricks that the dancers taking on the role could perform live. Later, Birmingham Royal Ballet’s Director, David Bintley, sought similar advice for his production of Beauty and the Beast, to help bring objects in the Beast’s castle to life.

In 2007, with the nights drawing in, the Nutcracker poster showed a moonlit scene from the start of Act II. As the orchestra plays, and the curtain rises, we see the stage flooded with a cloud dry ice, and Clara flying above it atop a magical white bird. The scenes takes careful preparation during the interval, with the lead ballerina having to wait, suspended 25 feet up in the air while the dry ice rolls out. Senior Stage Manager, Diana Childs, reveals: ‘Some of them really don’t mind, and I can send them up there and they’re happy to wait, but some of them get really scared up there, so I send them up at the last possible second!’

Having met all manner of colourful characters, Clara ends her magical evening by being transformed into a beautiful ballerina – the Sugar Plum Fairy. In 2004 we saw her on a poster for the first time, cradled in the hands of Drosselmeyer. Incredibly, this was also one of the first times that a dancer appeared on a Nutcracker poster in a tutu, despite the production featuring around two dozen of the beautiful, hand-made dresses!

The Sugar Plum Fairy swapped Drosselmeyer for a new poster partner in 2006, being joined by the Nutcracker Prince. TV audiences may recognise the ballerina featured as Elisha Willis, who played the title role in the BBC broadcast of Cinderella in 2010. Her dancing partner Chi Cao, meanwhile, appeared in the feature film Mao’s Last Dancer, with Star Trek‘s Bruce Greenwood.

In 2009, a previously unseen character made her first appearance, in the form of dancer Jenna Roberts as the Snow Fairy. Heralding a cascade of snowflakes that fills the stage, her appearance is a standout in a production full of beautiful, unforgettable moments.

For our 2014 image The Snow Fairy takes a step back, and our heroine, Clara, takes centre stage once again. To make sure that King Rat doesn’t gatecrash the poster, she is joined by not one but two versions of the Nutcracker, in both the form of the doll and the handsome Prince!

Did you come and see The Nutcracker during any of these seasons? Let us know in the comments box, and click here to book for this year’s shows, 28 November – 13 December 2014.