In the studios of Birmingham Royal Ballet, seven ballerinas are getting to know the stunt double that they will all be working with for this month’s performances in Birmingham.  She’s made of plaster, weighs a ton, and can’t stand up on her own. Happily, the dancers don’t mind the comparison.

The doppelganger is needed for the comic ballet Coppélia, the story of a crackpot inventor and toymaker, who builds life-sized mechanical dolls. Eventually he creates one so realistic that the local teenagers believe a new girl has moved into the street.

Sneaking into the toymaker’s house to investigate, they discover their mistake, and have to pose as toys around the workshop, hiding in clear sight until they can make their escape.

Central to this action is Swanilda, who adopts the place of the doll that fooled them all in the first place. Seven ballerinas will take turns performing the lead role each night, meaning that the doll that they impersonate has to be adapted for each show to make the switch convincing.

“When Swanilda is played by Australian-born Elisha Willis, we have to ensure the doll has a wig of matching blonde hair” explains Wigmaster Henry Menary. “Then the next night Swanilda might be played by fellow dancer Maureya Lebowitz, who is a very dark brunette, and so we have to switch the doll’s wig to match. On matinee days, different casts perform in the afternoon and the evening, which creates a lot of additional work between shows, on top of the wigs and facial hair required by the enormous cast of human performers.” 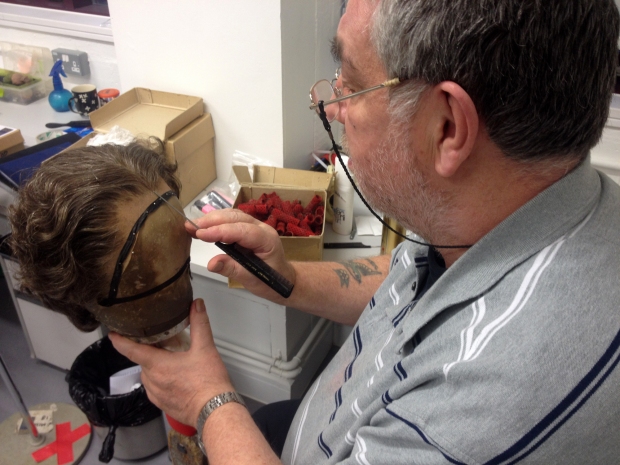 Confusingly, the doll itself then has a stunt double – a floppy cloth version that is fleetingly tossed across the stage. She’s only seen for a moment, and yet takes longer in hair and make-up than the prima ballerina.

“She’s so floppy, I have to told her head up with one hand while stitching her wig on with the other”, explains Wigs Assistant Lauren FitzGerald – the other half of Birmingham Royal Ballet’s two-person wigs team. 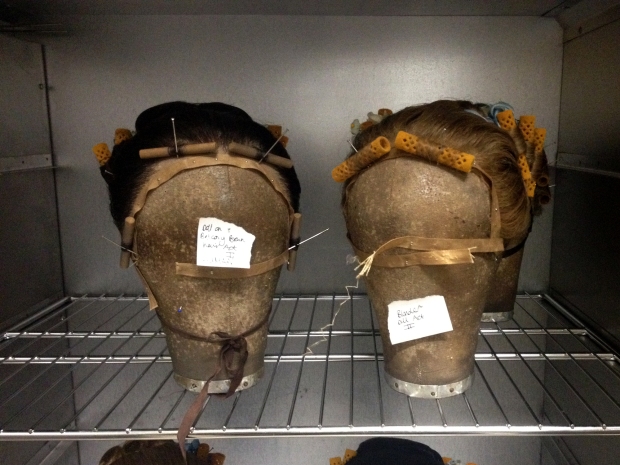 None of these wigs are bought off the shelf. Each is individually styled before each season, and dried in a purpose-built oven. They’re then maintained throughout the long seasons of performances, to avoid, as Henry says, “droopy ringlets”.

While the cloth doll has its wig stitched on, toupée tape is used on the rigid plaster version. The idea is not to make the doll look completely convincing – it’s important that the audience are in on the joke long before the characters on stage work out what’s going on!

Birmingham Royal Ballet dances Coppélia at Birmingham Hippodrome, 24-28 February. To book, click here, and see the trailer (including the doll!) below: