Avast me hearties and welcome on board!

Robinson Crusoe & the Caribbean Pirates has now sailed off on her maiden voyage following a fantastical press night last night (19 Dec 2012). Members of the press, media and VIP’s arrived to a recepetion complete with (chocolate) treasure, pirate booty, eye patches, skull and crossbones and plenty of swashbuckling! Everyone had a fantastic evening and the reviews that are pouring in certianly reflect this…take a look at the excellent reports so far:

Ahoy there! The past couple of weeks have proved to be a busy and exciting time as we saw the final performances of Birmingham Royal Ballet’s spectacular Cinderella whilst the cast for this year’s panto got into the full swing of rehearsals whilst set, costumes and a box full of magic tricks arrived at the theatre. 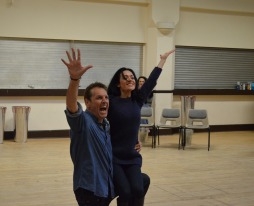 Last Friday we took a minibus full of media down to rehearsals in London at The London Welsh Centre, a quaint little building in the heart of the city by Euston Station complete with wooden beams and cosy chairs – the perfect Christmas setting! Upon arrival we were treated to two production numbers, one from Lesley Joseph and the other a duet from Brian Conley and local girl (in her record-breaking third panto appearance in a row here!) Kathryn Rooney. The one thing that really stuck out is the amazing choreography in this year’s production, this probably comes as no surprise as Karen Bruce, who is in charge of creating the routines this year, has worked on the last two seasons of Strictly Come Dancing and Vincent and Flavia’s Midnight Tango!

Following a brief lunch underneath the Christmas tree we then sat down with Brian, Lesley and producer and director of Robinson Crusoe, Michael Harrison for media interviews in front of the camera and behind the microphone. Michael has created no less than 53 panto’s for QDOS entertainment and is also producer of the brand-new West End musical, The Bodyguard. Both Lesley and Brian talked about their excitement for this year’s panto and Brian even promised a better show than last year’s sensational Cinderella!!

Brian & Lesley talk to the press

Meanwhile, the cast are now all safely in Birmingham for the final stages of rehearsals in our DanceXchange studios. Elsewhere on stage the rigging is being hoisted, ships are being assembled and giant shells are flying through the air as the magnificent set comes together. Wardbrobe are also busy unloading hoards of costumes and we have heard whispers that there are over 300 of them, all of which are brand new!!

To listen to interviews with Brian, Lesley and Michael from the day CLICK HERE and tune in to our latest Podcast.

Panto is always an exciting time here, and this year is certainly no exception – look out for more updates soon…

For more info & to book for Robinson Crusoe & the Caribbean Pirates CLICK HERE.

Today (Weds 5 Dec) marks national Panto Day and we have a very special guest blogger! Simon Sladen (@simonsladen) is the founder of Panto Day (#panto) and a fountain of knowledge on everything Panto! To commemorate today’s celebrations he talks us through the fascinating history of this year’s panto title, Robinson Crusoe…

The tale of Robinson Crusoe, a seaman shipwrecked on a tropical island, was originally written by Daniel Defoe and published nearly 300 years ago in 1719. The novel enjoyed great success and it wasn’t too long before pantomime writers decided to ride the wave of popularity and turn the tale into a fantastical seafaring adventure for the stage.

Robinson Crusoe was first presented as a pantomime in 1781 at the Theatre Royal, Drury Lane in London. The production was a sell-out and ran for a total of 38 nights, one more than this year’s production at the Birmingham Hippodrome.

Pantomime is often thought of as a purely British form of entertainment, but Robinson Crusoe holds the accolade of being the first ever pantomime to be staged in America. In 1786 Robinson Crusoe; or, Harlequin Friday toured to the John Street Theatre, New York where it repeated its success and paved the way for a number of subsequent productions, including an 1878 Robinson Crusoe which ran for ten and a half weeks in Newcastle. Other popular productions include Drury Lane’s 1881 and 1893 Robinson Crusoes, the latter of which featured music hall stars Marie Lloyd as Polly Perkins, Dan Leno as Mrs Crusoe and Little Titch as Man Friday. The show was the only one in the so-called ‘Father of Modern Pantomime’ Augustus Harris’s career to lose money and featured a scene in which Ada Blanche as Robinson Crusoe encountered a troupe of cannibals and shot them dead with a machine gun!

Having enjoyed great success and popularity until the late 1980s, including an ice-panto version at the Empire Pool, Wembley in 1951, the title fell out of favour only to be revived with the birth of Disney’s Pirates of the Caribbean films. In 2008, Qdos Entertainment, the world’s biggest pantomime producer, launched their brand new version of the tale Robinson Crusoe and the Caribbean Pirates at the Theatre Royal, Newcastle starring Clive Webb as Robinson Crusoe, Danny Adams as Captain Crusoe, Chris Hayward as Dame Rita Crusoe and Kathryn Rooney as the Magical Mermaid. Since then the production has been entertaining audiences around the country in venues such as the King’s Theatre, Edinburgh, SECC, Glasgow and the New Theatre, Cardiff. The Caribbean Pirates are now a staple of the narrative, with pantomime company First Family Entertainment and pantomime writer and director Janice Honeyman including them in their 2010 productions at the Regent Theatre, Stoke-on-Trent and Joburg Theatre Complex, Johannesburg. 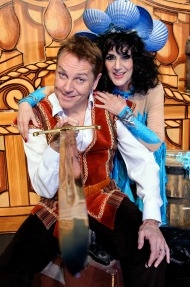 This year Qdos Entertainment brings its latest version of the title to the Birmingham Hippodrome starring Brian Conley as Robinson Crusoe and Lesley Joseph as the Enchantress of the Ocean. The Hippodrome’s production is the only professional Robinson Crusoe to be staged in the UK this year and will be the first time the theatre has welcomed the title since 1967. Interestingly, not only was Robinson Crusoe Conley’s first ever pantomime when he appeared as the Bosun at the Grand Theatre, Swansea in 1979, but it was also the first ever pantomime Qdos Chairman Nick Thomas produced. In 1982 Thomas staged Robinson Crusoe in Outer Space at the Charter House, Preston which starred Jimmy Cricket as Simple Skyman in his debut pantomime performance.

With its exciting swashbuckling narrative, Robinson Crusoe has hosted a wealth of stars. Tommy Cooper and Arthur Askey starred in the London Palladium production of 1957, with Askey repeating his role as Big Hearted Martha in the theatre’s 1967 pantomime alongside Engelbert Humperdink as Robinson. In 1990, Olympic gold medallist in javelin Tessa Sanderson starred as Girl Friday in Guildford and in 1997 Jordan aka Katie Price appeared at the Pavilion Theatre, Worthing. David Essex has played the title role six times and in 1973 the Wolverhampton Grand’s production starred four real lions onstage! Other notable Robinson Crusoe cast members include Norman Wisdom, Christopher Biggins, Keith Harris, Colin Baker, Joe Pasquale, Samantha Mumba, John Barrowman and the Krankies.

A title offering plenty of spectacle, it was also one of the first to incorporate 3D film technology when the Theatre Royal, Norwich staged a 3D shipwreck sequence in 1980.

This year’s Robinson Crusoe at the Birmingham Hippodrome is to set to boast a flying sea monster, a shipwreck, acrobats, dinosaurs and mermaids, demonstrating pantomime’s ability to move with the times and remain fresh and exciting for a 21st Century audience.

Robinson Crusoe and the Caribbean Pirates at Birmingham Hippodrome marks the 6th pantomime appearance for Brian Conley.  The production opens on 15 December and is the UK’s biggest pantomime production.