As far as most patrons are concerned, the people that greet them when they arrive at the theatre are simply starry-eyed. Some may even be thespians-in-the-making, people who sell a few programmes to make ends meet until fame whisks them off to the West End. For some this may be true, take Amy Booth-Steel for example. Once a Front of House steward for Birmingham Hippodrome, she found her break on BBC’s I’d Do Anything; Andrew Lloyd Webber’s search for Nancy in Oliver. Despite not winning the show, she’s gone on to perform in The Sound of Music and Sister Act in London. Not bad for a girl that sold ice-creams.

For many however, life may not reach such dizzy heights, but we certainly have something to shout about. Sally Staff, Trainee Supervisor for the 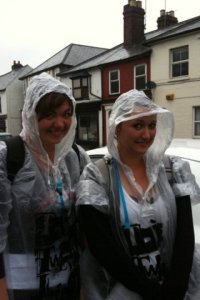 Front of House team walked (yes walked!) from the Hippodrome to London’s Dominion Theatre last week in aid of the Mercury Phoenix Trust, the charity set up in memory of Queen’s Freddie Mercury, which was brought to our attention during the production of We Will Rock You last summer. Will she be inspired to do it again in honour of the musical returning next year? We’ll have to wait and see.

The charity work doesn’t end there. Our Head of Customer Services, Jonathan Thompson, ran The Great North Run in 1 hour and 49 minutes last week in aid of The Guide Dogs for the Blind Association, and if that wasn’t enough, he’s participating in the Birmingham Half Marathon on October 24th. So, if you’re coming to see a show in the next few weeks, feel free to congratulate them – they’ll like the attention!

While some staff may be out saving the world or performing onstage, the rest of us have to get on with some work. When we’re not serving you in kiosks or nagging you for tickets at the doors, we’re working in other areas of the theatre. Whether it’s at corporate conferences or outdoor events such as Artsfest or Six Summer Saturdays, we’re keeping ourselves busy. Two weeks ago I worked at the Press Launch for this year’s pantomime, Dick Whittington. Complete with bright and shiny costumes, complimentary cupcakes and Orville harassing unsuspecting journalists, panto had well and truly arrived, much to the media and the staff’s excitement.

That same week, cast members from Blaze came in to lead a street dance workshop with sixth-form dance students from local schools ahead of their shows next week. The results of the workshop can be seen in pre-show performances in the foyers from Thursday 7 October along with other local talent. If the workshop is anything to go by, the show promises to be thrilling. I too was offered the chance to join in, but after considering my dancing skills I thought better of it, so you can all breathe a sigh of relief. 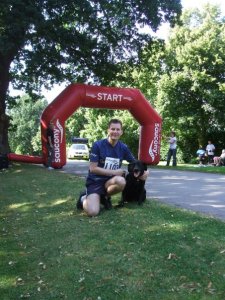 Jonathan Thompson and Yozi at the starting line

So next time you venture into the foyers before a show, you may find yourself wondering just what we’ve been up to while you were away. Whether it’s working with puppets or raising money, you can be sure that there’s never a dull moment.

We Will Rock You returns  to Birmingham Hippodrome in 2011.   Blaze opens on 7-9 October.  Performances in foyer pre-show on 7 October from 7pm.
www.birminghamhippodrome.com
Display Sidebar